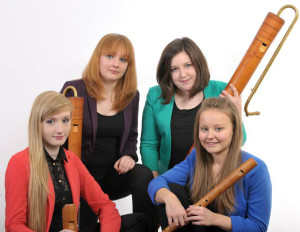 The consort competed as part of the Royal Overseas League Ensemble Competition (category B) and performed a mixed programme of contemporary and renaissance works. The group combined the sounds of 16th Century Spanish instrumental and vocal music with compositions of the 20th Century, including theatrical elements. Their success marks the first time a recorder consort has won the competition in its 62 year history.

The members of BLOCK4 are studying at the Royal College of Music under Ashley Solomon, Julien Feltrin and Maria Martinez, BLOCK4 present a dynamic approach to contemporary consort music as well as offering a captivating interpretation of music from the Renaissance and Baroque periods. The consort moves between the full range of both renaissance and modern instruments to explore contrasting sonorities.

They have previously received a high commendation at the RCM’s Senior Woodwind Prize in 2013. BLOCK4’s performances have included a variety of concerts and masterclasses with renowned experts such as Walter van Hauwe and Pamela Thorby, with exciting upcoming concerts at the Regents Hall and the Queen Elizabeth Hall. The group are currently focussing on new works, and are collaborating with RCM composers in order to further expand the contemporary repertoire for their instruments.

Information about upcoming concerts can be found at www.block4.co.uk