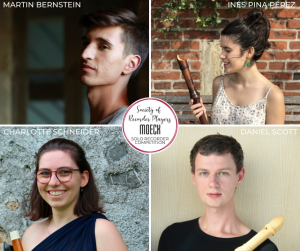 Absolutely delighted to announce the finalists of this year’s Society of Recorder Players/Moeck Solo Recorder Competition!

Martin Bernstein is a recorder player based between New York and Paris. He has performed across the US and Europe and has won numerous prizes and awards.

The Swiss recorder and flute player Charlotte Schneider is active as a soloist and chamber musician in Switzerland and Europe. She is currently pursuing a master’s degree at the Schola Cantorum Basiliensis.

Spanish recorder player, Inés Pina Pérez is currently enrolled in a Master’s degree at the Hochschule für Künste Bremen. She is an active member of several ensembles, performing in Germany, Switzerland and Spain

Daniel Scott is a British recorder and flute player based in Amsterdam. He has just graduated from Conservatorium van Amsterdam, supported by a scholarship from The Countess of Munster Musical Trust. He is a member of the Royal Wind Music, a renaissance recorder ensemble with whom he has played concerts across Europe.

They will compete live at LIFEM at 2pm on Friday 12th November 2021 at St. Margaret’s, Blackheath.

Tickets to the final are free but must be booked in advance.