We normally meet on the first Saturday afternoon of each month except August. The dates of our meetings in 2022 are

At our meeting on 4th June we said goodbye to Caroline Jones, who has stepped down from her position as our Musical Director after seven years of expert and inspiring leadership. As a token of our appreciation, the branch presented Caroline with a rose, appropriately named Caroline Victoria. The photo below shows Caroline accepting our gift. 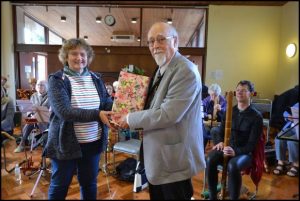 As always, Caroline’s selection of music was varied and thoughtful. We played Geminiani’s Concerto Grosso Op3, No 2. Some madrigals by Ghibel and Marg Hall’s Something Old, Something New,

We began our afternoon with Alex Ayres’ arrangement of the Dona Nobis Pacem section of J S Bach’s Mass in B minor. This moving piece was played as a tribute to Dick Russell and Robert Hoffman, both long-term and highly respected members of our branch, who died recently. Our final performance of this piece was followed by a deep silence as we remembered the departed.

Dick’s playing of recorders and other early instruments was always expert and appropriate. He made many arrangements of vocal pieces which gave us all great pleasure. Dick was a helpful and clear conductor.

Robert’s careful and accurate record keeping was a vital part of the administration of our branch and his confident and skilful playing was a feature of many of our Saturday afternoon meetings. Like Dick, Robert was a member of the Corydon Players 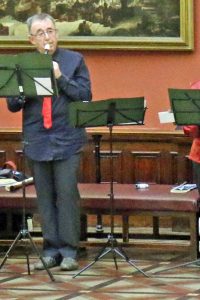 Both these fine musicians will be long remembered and sorely missed.