The recorder is an ideal instrument for late starters and those returning to music making. Essex branch’s friendly and enthusiastic group of some 20 members looks forward to welcoming you.

Essex branch members were greatly saddened to learn of the death on Christmas Eve of Marion Panzetta.  She was 87.

In 2019 Marion retired after more than 40 years conducting the branch.  She was the branch’s first Chairman, and one of the principal conductors from the start.  In 1993 she relinquished the chairmanship to become a joint Musical Director.  In appreciation of all she has done for the branch the members made her Honorary President of the branch.  The presentation was made on 2nd November. 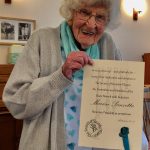 On 7 March we enjoyed a stimulating and inspiring playing day with our guest conductor Michael Copley from Cambridge.

We have players of all standards in the group; you need to be able to read music but for those who are new to the recorder or returning to music after a break there are plenty of experienced players to offer support and encouragement. Bring your recorder and a music stand if you have one; all music will be provided. There is a charge of £5 for visitors.

Our meetings are based on ensemble playing, and each month our conductors guide us through a variety of music from the 16th to the 21st century. It’s not just descants, we play everything from sopranino to great bass. Less experienced players might like to try the tenor. It’s the same fingering as the descant and being in the middle of the range players feel less exposed than when they are on the top descant line! Any ensemble group needs more players on lower instruments so we encourage members to try other sizes of recorder as they progress, making the group more versatile.

There may be music stands and tenor recorders available to borrow, and the branch also has a bass recorder which members may be able to borrow occasionally.

As well as meetings led by our regular conductors, we visit Ingatestone Hall in the summer to play in the Long Gallery for visitors to the house, we invite a visiting conductor each year and usually organise a day course or playing day.

For more information contact us at essex@srp.org.uk or telephone Annelies Wing, secretary on 01992 573383

We have a Facebook page: The Society of Recorder Players – Essex Branch.

In November 2016 we were joined by visitors from other branches for a playing day conducted by Ian Wilson who was making a welcome return to Brentwood.

As soon as we heard about the SRP Long Service awards for branch officers we were keen to nominate some of our members.   Marion, Roy, Christine and Madeline (pictured) and Margaret (not present) have all been members of the branch since it was founded in 1978, and very much involved in keeping it running since then.   We presented them with their certificates at our meeting in March 2015. 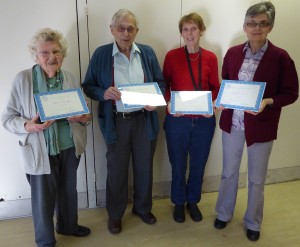 See below for more photos from our activities (click on an image to see a larger version).