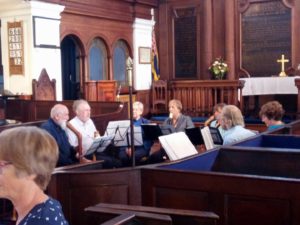 The Branch is now directed jointly by two other local instrumental teachers, Janet Seltzer and Julia Harding. As Director of the King Edward Musical Society of Macclesfield (KEMS) Concert Band and of the Newcastle-under-Lyme String Orchestra, Julia has extensive experience of working with adults, as does Janet who – in addition to being a peripatetic teacher of recorder in local schools, also takes adult students. Both have a keen sense of humour and an interest in recorder music of all periods, so a varied and enjoyable time is assured at our meetings.

You can hear the standard to which we aspire (and – on a  good day – attain!) in these audio clips: 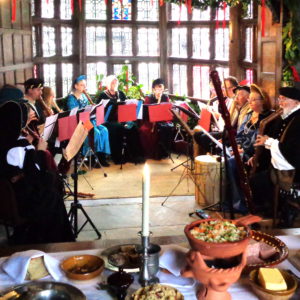 Did you not see my lady

If you’re thinking of joining us, more information can be found on our Prospective Members’ page

Almost from our first year, some of us have been involved in public performance.

We have performed from time to time at the National Trust’s Little Moreton Hall both at Christmas and to support events such as Maypole dancing. In March 2020 we provided three contributions to Macclesfield’s concert for  Contemporary Music for All for which we played:

On 4 June 2022, we had the first slot at an evening of music at Christ Church in Macclesfield, which included settings of Elizabethan madrigals, four numbers from Peter Warlock’s “Capriol Suite”, the jazzy “Summer Blue” by Paul Richards, and an arrangement of the “Teddy Bears’ Picnic”.

We normally have an Annual Playing Day in the Spring, with a visiting conductor. In 2022, our visitor was Michael Copley from Cambridge.

SRP Full members £49 for the year

Household members £72.50 for the year

Meetings are generally from 2pm-4pm:

We meet at Holy Trinity Church, Hurdsfield, SK10 2PX, from 2-4pm. The church is on the B5470 (Whaley Bridge) road, just up the hill from from Macclesfield’s main Tesco.
Our forthcoming schedule of meetings is as follows:

provisional dates for 2023 are:

We have an additional webpage specifically for  intending members