Cambridge branch received the sad news  that Michael Sharman passed away on Wednesday 11th May 2022 at Addenbrooke’s Hospital. In March he suffered a stroke which left him paralysed on his left side. He had been making a slow recovery but this week suffered a heart attack that weakened him.
Michael had been instrumental in setting up and confirming the pattern of recorder playing in the Cambridge Branch when it was refounded at Chesterton Community College in the early 70’s. He and Esther welcomed and encouraged all recorder players to weekly meetings that were divided between conducted sessions and consort playing, making use of a growing branch library. With the encouragement of Anthony Rowland-Jones as well, the branch embraced Early Music, took part in local recorder concerts and a master class. There was a joint meeting with the Oxford Branch and an elaborate pastoral visit from Brian Bonsor. Michael arranged a National Festival in Cambridge with the meticulous care that made him an utterly reliable pharmacist by profession.
He was also chairman of the National Society, briefly seeing through, as editor, copies of the Recorder Magazine during an emergency. He made lifelong friends of the Wyatts of the Oriel Press and welcomed Paul Clark and Helen Hooker into his own home when they visited Cambridge. Friday Nights at Church Lane Farm were a delight for determined recorder players within reach of Cottenham. Michael moved on from branch playing to making music in weekend house parties and founded  the Voices, Viols and Recorders week at Halsway Manor in Somerset. He had a multitude of friends with whom to play music.
The world of amateur recorder playing is not the same as it was when Michael took up playing with the Cambridge Branch. It is well worth recalling the stalwart efforts of outstanding contributors like Michael to its evolution. We are indebted to Michael Sharman for his part in our pleasure in playing the recorder together today.

Cambridge Branch during the Pandemic

Cambridge Branch normally meets 30 times during the recorder playing year. Not doing this has left quite a large gap in our lives, but it has been an opportunity for some members to try something different on a Wednesday evening. The branch committee decided to charge only the most basic SRP subscription, retaining the full branch membership. We were ready, at short notice, more than once, to return to some sort of group playing, but have been thwarted by prudent government health directives.

Using the generous Zoom facility of our secretary, we have been able to undertake some side by side playing, making use of Helen Hooker’s music video downloads to enhance our playing evenings. We have also enjoyed presentations from Andrew Collis, Michael Copley, Terry Mann and Evelyn Nallen, provided at somewhat shorter notice than might otherwise be expected. Additionally, members have “attended” online events found on the SRP website, including an online recital and talk on recorders and baroque bassoon from Kate Allsop and Mark Wilson (via the Oxford Branch) and the music of Charles Dieupart (via the Bristol branch).

The inspiration for Andrew Collis’ recital and Terry Mann’s talk on recorder making came from TRM. Branch news referred glowingly to Andrew Collis. TRM featured the work of Terry Mann as a medieval and renaissance recorder maker. His talk was outstanding for presentation and novelty. His enthusiasm for early music was infectious. He turns out to be a beguiling story teller, speaking from his workshop whilst sharing technical information about his craft in easily understood form. He will “perform” again at Medieval Music in the Dales in March. If, by now you have missed this weekend event, I hope you will find another opportunity to hear him. Evelyn Nallen attended Terry’s online talk and made an appreciative listener, nevertheless drawing Terry out on his experience of folk music making, recorder production and early music. She has agreed to lead an evening of medieval duets for our branch later in March.

Evelyn’s most recent presentation for us concerned the importance of playing baroque dance suites, in French style, with an understanding of the dancer’s technical requirements. This approach was clearly based on considerable research and made a fascinating and colourfully illustrated talk. The audience was required both to dance and play the recorder. We were able to appreciate the appropriate steps for a dance and what made a humorous version. Questions showed that there is clearly more to this subject than there was time for answers. The online meeting advertised at Oxford for the 27th March touches, by chance, on some of these themes.

We are in the process of fashioning a return to face to face playing. Helen Hooker has been a stay and support for a worthwhile approach on this matter. Cutting through much online obfuscation, with a pragmatic approach, her enthusiasm for a return to recorder playing on what can only be seen as doubtful dates, is encouraging. There may be changes to the way our branch approaches recorder playing but we shall have to talk together freely about it, face to face and without constraint. Meanwhile we should thank the generous support of Terry and Evelyn for giving their time to keep us informed and enthusiastic and making us eager to return to our Music Room, library and playing evenings.

Members will be saddened at the news of the death of Anthony Rowland-Jones, a Vice-President of the Society and Honorary President of the Cambridge Branch. He first joined the SRP as a member of the Oxford Branch while he was at New College in the late 1940s, and founded the West-Yorkshire Branch of SRP during his time as an Assistant Registrar at the University of Leeds. Though he pursued a distinguished career in university administration, he will be especially remembered in the recorder world for his series of books Recorder Technique, A Practice Book for the Treble Recorder and Introduction to the Recorder published by the Oxford University Press. These were followed by Playing Recorder Sonatas, also published by OUP. Perhaps some of Anthony’s most significant work was his ground-breaking research into recorder iconography, which resulted in a series of fascinating lectures and many important articles in a number of journals including The Recorder Magazine. An obituary will be posted on the SRP website and included in a future edition of The Recorder Magazine. Our sincere sympathy is extended to his wife Christina and his sons, Charles and Matt.

A great day was spent with Moira Usher in Hemingford Abbots learning some secrets about the art of conducting. Even those who came along as guinea pigs were able to benefit. Here we all are with our batons. 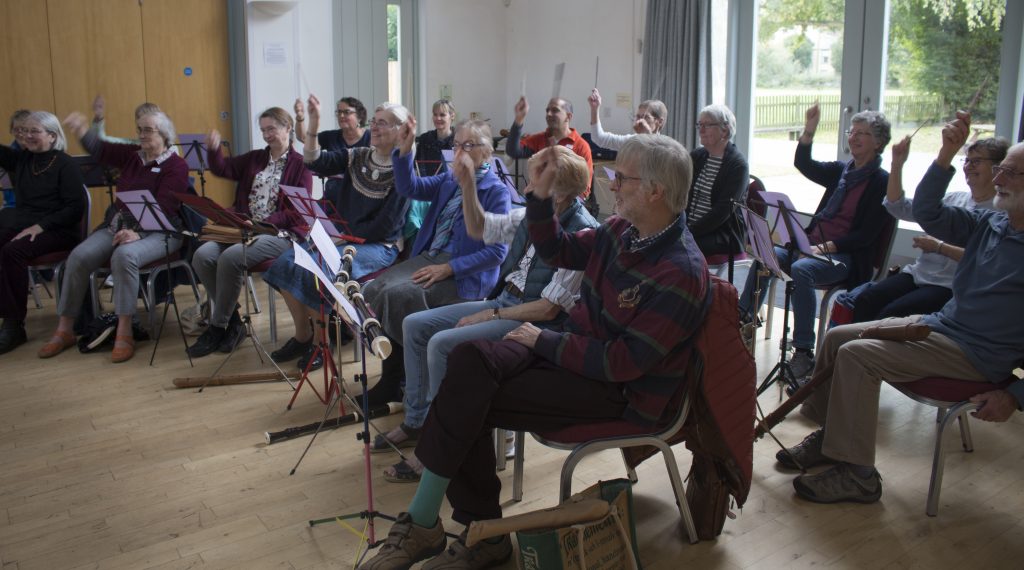 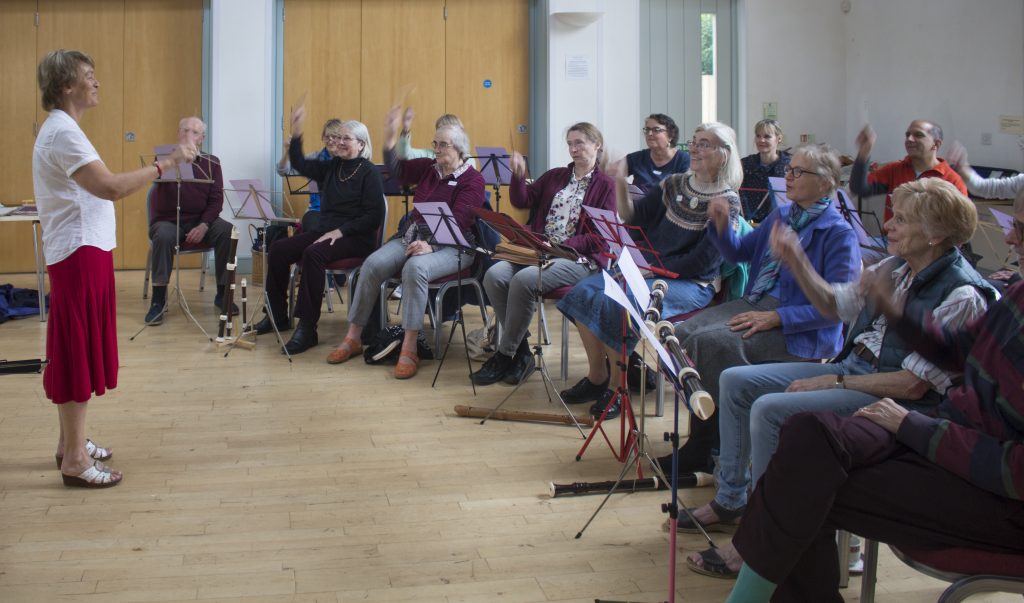