“As ever, aided by his extensive knowledge of Venetian musical history, Philip concentrated on the interpretation of the music that he believed the composer would have wanted” 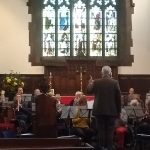 The Durham branch organised an all day Gabrieli workshop with Philip Thorby on November 2nd 2019. This attracted 36 players from the North East and Yorkshire prompting a move from the normal rehearsal venue into St Margarets Church, Crossgate taking advantage of extra space and better acoustics.

The playing sessions provided an opportunity to study four different pieces ranging from 4 to 10 parts and using all sizes of recorder. Philip was diligent in re-organizing the space between sessions, directing players into appropriate areas to maximize the playing time. 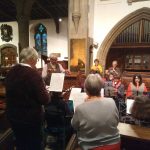 For those who hadn’t played under Philip before, they were impressed by his clear direction, his amusing and entertaining style and his obvious expertise and encyclopaedic knowledge of Gabrieli’s music. Philip is a stylish and charismatic individual who directed us through an enjoyable and informative workshop where aspects of the music were brought to life through relevant stories and references to the period. Importantly we all felt that we had played to a good standard and in the style.

At the December meeting, members were given a fun “Thorby quiz” with questions ranging from the colour of Philip’s tie to the meaning of “God given tactus”!