New Landscapes for the Recorder 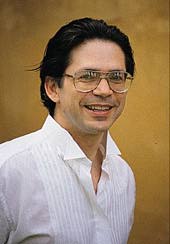 David Bellugi
(with a “virtual” orchestra of recorders)

In association with Musical Italia 98

The music in this programme is presented in a very unusual way: the latest in modern digital technology gave me the opportunity to create a “virtual” orchestra in which I not only play all of the instruments but am also arranger and conductor. The orchestration of this accompaniment uses choirs of instruments, like the “registration” on an organ, where one note may be played by several different instruments in different octaves.

Klezmer music, aptly defined by the great Giora Feidman as “Jewish Soul Music,” owes its particular oriental flavor to the use of various modes which employ the distinctive interval of the augmented 2nd (for example: D-Eb-F#-G-A-Bb-C#-D).

The Renaissance dance form as exemplified by Gervaise has the remarkable characterstic of an almost total absence of musical dissonances. The widespread popularity that this music enjoyed in its day, as well as its pleasing structural and melodic simplicity, make this music an interesting correlative to modern “pop” music. Improvising diminutions or divisions (a particular form of musical variations) makes this music all the more fun to play and listen to.

Dolores Mortis by Diomedes Cato is an elegant example of an instrumental setting of a profoundly moving vocal music.

Paesaje cubano con rumba by Leo Brouwer – Cuban guitarist, composer and conductor – is based on a compositional technique (known as minimalism) in which rhythmical “cells” are superimposed. In the case of Paesaje, these rhythmical cells become more and more complex and dense through mathematical modulations.

Juan Del Encina, a contemporary of Christopher Columbus, was a Spanish poet, playwright and composer. His music – a definite precursor of Renaissance polyphony (at least a generation ahead of his time) – freely uses modes, melodies and rhythms of popular Castilian music. On this note: the recorder, as I see it, has a close relationship to certain folk and ethnic instruments whose music stems from an oral tradition: indeed, much of Early Music either re-elaborates aspects of popular culture or becomes synonymous with it. Encina, for example, freely borrows from popular Castilian culture, while Gervaise’s branles are examples of notated folk music.

The Libro dei 15 Balletti da cantare o sonare con ogni sorte di stromenti [Book of 15 ballads to be sung or played by every kind of instrument] by Giovangiacomo Gastoldi, was one of the first commercial success stories of musical printing history. It was printed in at least 14 different editions and was known throughout Europe. It is undoubtedly ingenious musical writing of graceful simplicity.

The music of Franz Joseph Haydn presented in this programme is a selection of pieces that he composed for musical clocks (meaning a mechanical musical instrument: an early form of midi sequencer!). These pieces are a joyful synthesis of late eighteenth-century musical styles.

In Bach’s Musikalisches Opfer of 1747 (BWV 1079) we find this Canon a 2 Per tonos that includes the Latin subtitle: Ascendenteque Modulatione ascendat Gloria Regis which means “as the modulations increase in pitch so may the Glory of the King.” Like most of the canons from the Musical Offering, this is a canon over a cantus firmus, (in this case the cantus firmus is an embellished version of the melody supposedly played by Friedrich the Great). The 2 part canon (written in counter-point to the cantus firmus) is at the fifth. Bach modified the Cantus firmus so that it’s melodic line ends exactly one tone higher than it begins, therefore it modulates up one whole step each time the cantus firmus is played. I have chosen to stop the modulations after one octave, therefore after 6 whole-tone modulations, taking us through C minor, D minor, E minor, F# minor, G# minor, a#/Bflat minor and back to C.

He has premiered various works (Luciano Berio, Nuccio D’Angelo, Ugalberto de Angelis, Riccardo Luciani, Carlo Prosperi, and Giulio Viozzi have dedicated works to Bellugi) and has appeared successfully as conductor-soloist. In 1999, in collaboration with Italian actor Carmelo Bene, he will premiere a work written by Gaetano Giani-Luporini.

David teaches Recorder at the Florence National Conservatory in Italy where he has been living for the past 20 years.