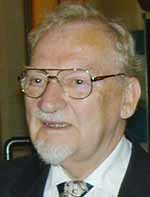 Jim has conducted Edinburgh Branch for more than 25 years and been its Musical Director for 16. He has also been a visiting conductor for the SRP and has conducted at many Festivals including all Scottish Recorder Festivals, to which he brought new music each year. A wide range of his compositions and arrangements has been published by Fentone Music and Hawthorns Music. In 2003 he decided to retire.

On 16 June 2003 Jim Carey conducted at his last Summer Evening concert as Musical Director of the Edinburgh Branch, along with Henriette Bos, our other conductor who is expected to succeed Jim as MD.

As his contribution to the programme, Jim conducted the branch in the five-part Sonata by Schmelzer, a Canzona by Frescobaldi arranged by Dom Gregory Murray and his own arrangement of Two French Dances – “From Berry” and “From Brittany”.

Present and former members in the interval

At the end of the concert, Mabel Cooney (Branch Chair) thanked all who had contributed, particularly Jim, whose composition titles were worked into her speech.  Sandy Howie, who had shared the Musical Directorship  for some years, quoted from the internet as evidence of Jim’s fame.  Jim commented how well he had worked with both Sandy and Henriette, despite widely differing tastes in music.  Finally, a first for the branch, there was an encore – Singin’ in the Rain, in the arrangement by Philip Evry.

Mabel presented Jim with a gold wristwatch from his friends in the Branch, and Peter Wraith gave Jean a large bouquet of flowers. 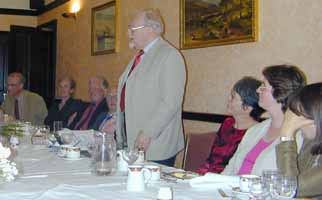 Jim in reply thanked his friends for the gifts and reminisced about the officers who had worked for the branch, especially Eileen Finlayson our long-serving Secretary.  He then passed the baton given to him by the widow of his predecessor, the late Eric Gillett, to Henriette Bos who will take over as Musical Director next season.

ending with  music by James Carey

We hope that, although no longer our Musical Director, Jim will often come back to visit us and continue to write for the recorder, and that we will be the first to sample the fruits of his labours.