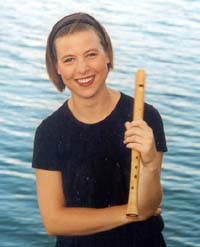 This recital is supported by the SRP Walter Bergmann Fund from the Philip Cole bequest.

Pia Loman is Swedish, now living in Denmark. She studied in Sweden with Stefan Axelsson and Anna Wallin and in Denmark at the Carl Neilsen Academy with Dan Laurin, graduating in 1996 with the highest possible mark. In 1996 she was third prizewinner in the European Recorder Teachers’ Association solo recorder competition for contemporary music and in October 1999 was the winner of the Moeck/SRP Solo Recorder Competition in London. Her Prizewinner’s Recital was in the Wigmore Hall, London on 25 February 2000. This Edinburgh recital follows a performance at the Northern Recorder Course in Chester.

Pia is a member of the recorder quartet SIRENA, formed in 1993, which has won several prizes, performed in Denmark, Sweden and Germany and recorded a CD under the BIS label of contemporary Dutch, Japanese and Danish music, some composed for the quartet. In 2001 they will record a CD of baroque music. Pia also performs in other groups, with the percussionist David Hildebrandt, with her husband Niklas on baroque bassoon and in a baroque band in Lund.

The Moeck/SRP Solo Recorder Competition is promoted by the Society of Recorder Players and Moeck UK. It aims to encourage young players of talent (under 30 years of age) and help them in their professional aspirations. Competitors had to show that they are able to sustain a whole recital programme showing the different facets of the recorder and its repertoire. The 1999 finals were judged by Walter van Hauwe, Piers Adams and Jean McCreery.