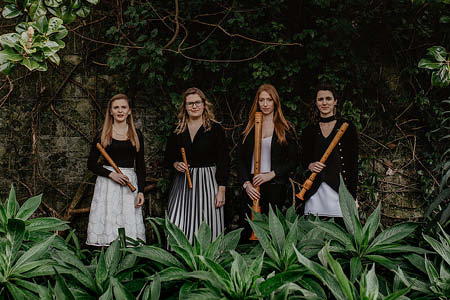 Journey to the New World

A recorder quartet described as 'Early Music's very own Spice Girls', Palisander prides itself on presenting imaginative, historical programmes with a wide range of repertoire; performing largely from memory, on recorders up to 6 feet tall.

This programme is inspired by voyages to the New World by Christopher Columbus, Sir Francis Drake and Sir Walter Raleigh. It centers on themes of Renaissance exploration and discovery, with musical illustrations of the men’s journeys to the New World. The chosen repertoire balances music of the explorer’s native courts performed on historically authentic instruments, with pieces inspired by the sea, explorations into the music of the indigenous peoples of the Americas and pieces inspired by the conflicts that arose as Anglo-Spanish relations soured. Whilst the ideas are drawn from the Age of Exploration, the music is not restricted to a single time frame, as the programme features repertoire that spans more than 500 years: ranging from Thomas Tallis to Vivaldi to Vaughan Williams. Alongside pieces that were originally conceived for recorders and pipes, much of the repertoire has been specially arranged, written or reconstructed by Palisander for recorder quartet. The ensemble will showcase a large range of recorders both Renaissance and Baroque in design.