Supported by the Walter Bergmann Fund

The Fringe, featuring emerging young artists, will run alongside the annual SRP Festival in Durham. The series of concerts will take place throughout the weekend utilising the historic gothic architecture of Ushaw College. These concerts are open to the public as well as festival goers, and will offer a unique opportunity to hear and interact with some of the best and most exciting young recorder talent. 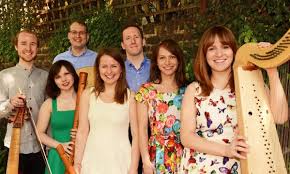 Lux Musicae London formed in 2014 to musically explore the transition from the Renaissance to the Early Baroque. With their diverse instrumentation (harp, lute, recorders, voices and viol) and their expressive and rhetorically led approach to text and melody, the group enjoys an exciting range of instrumental colours and performance practices. Their programmes reflect this, connecting the visual arts, poetry and philosophy with the music of the turbulent sixteenth and seventeenth centuries.

In 2016, Lux Musicae London were selected as finalists in the Concours internationale de Journées de Musiques Anciennes in Paris and participated in the BREMF Live! Scheme 2016/17. They were semi-finalists in the ROSL competition 2018. Since performing in the Brighton Early Music Festival they have been in increasing demand, performing in various festivals around Europe, including the Fringe of the MA Festival Brugge, the Fabulous Fringe of Utrecht’s Oude Musiek Festival and the International Young Artists Presentation in AMUZ: Laus Polyphoniae Festival in Antwerp. 2018 sees Lux Musicae London performing in Germany, touring Ireland and working around the UK, including returning to the Brighton Early Music Festival with their new programme Dowland’s Denmark. 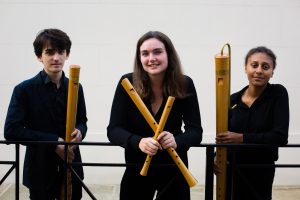 With repertoire spanning from the 14th to the 21st Centuries, Parandrus prides itself on exploring the interconnections between ancient and contemporary works. Featuring Charlotte Barbour-Condini, Sophie Westbrooke and Daniel Swani, the ensemble first met at the Junior Department at the Royal Academy of Music, launched Parandrus in the summer of 2017. The ensemble quickly received recognition abroad, being awarded first prize in the category for professional ensembles at Open Recorder Days Amsterdam 2017.

Charlotte and Sophie were both finalists in BBC Young Musician and all three enjoy busy and varied performing careers. They are grateful for the support they have received as individuals from the SRP/ Walter Bergmann Fund. 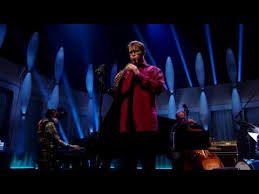 A Handel on Jazz

Award winning jazz saxophonist, recorder player and composer Tom Ridout was a finalist in the BBC Young Musician Jazz Award 2016 and is a member of NYJO. Tom also fronts his own bands performing his original music and arrangements. He recently released his debut album No Excuses with a13 piece band including strings and brass. Predicted by Jazzwise Magazine as an upcoming musician to watch out for.

Tom is grateful for the support he received from the WBF as a teenager! 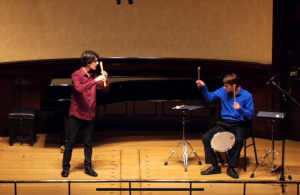 Experience sounds of the future with recorder, synthesiser and percussion. Daniel Swani and Joe Parks present a vibrant programme – Kaleidoscope.

The duo formed in 2016 whilst both members were studying at The Purcell School of Music. Both of them went on to receive scholarships to study at conservatories in London. Together they have been performing at prestigious venues, including recitals at Wigmore Hall, Drapers Hall and Morley College. Their exciting programme involves early and avant-grade repertoire as well as fusing the two. They have been described as having created “extremely evocative soundworld[s]” and having a “refreshing palette of colour”.

Daniel has given recitals at Wigmore Hall, Warwick University, Dukes Hall, for the Leeds International Concert Series and the Cheltenham Festival. As a keen chamber musician, he has played in baroque ensembles on recorder and flute and performed live on BBC radio 3. Daniel is grateful for the generous support of The Walter Bergman Fund

Joe first became fascinated by percussion through listening to Latin-American jazz and started learning ethnic percussion and kit when he was eight. He was a percussion finalist in BBC Young Musician 2016 and is now studying at the Royal College of Music.