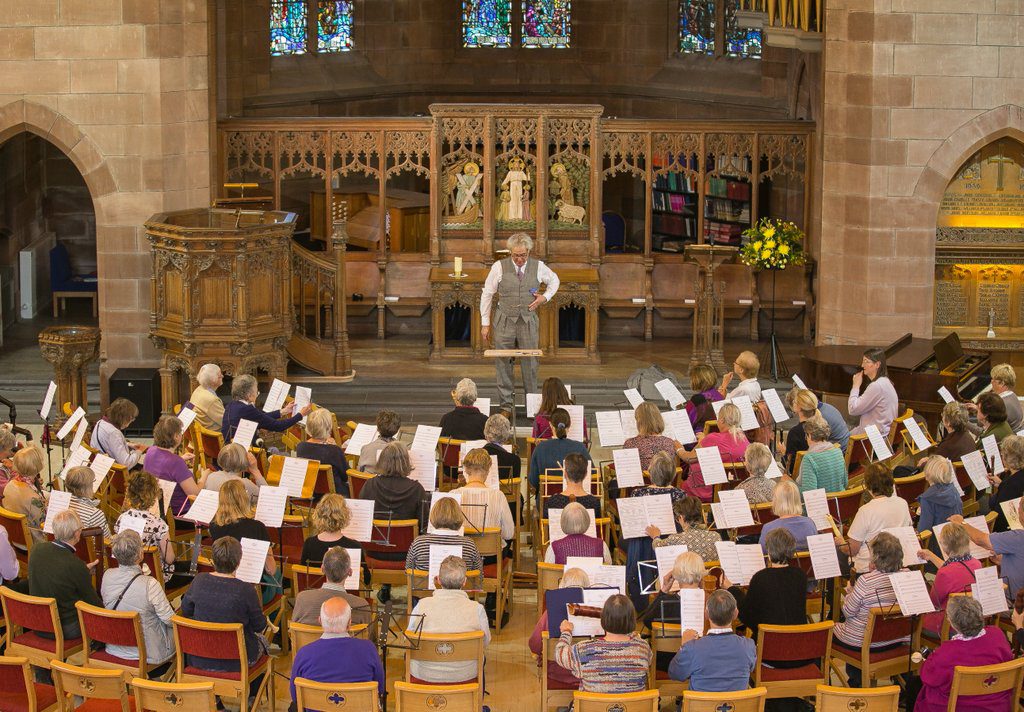 The annual ‘Gathering of the Recorders’ was held in 2016 on 18 June in Edinburgh. We have six SRP branches in Scotland; hosting the Festival rotates between the larger branches. Members from Orkney, our newest branch were otherwise engaged with the St Magnus International Festival, however more than 80 people from all around Scotland, plus a few welcome players from England, made their way to Edinburgh for a day of wonderful music making.

Philip Thorby, our principal conductor, opened the Festival with massed playing of Michael Praetorius Suite of Dances from Terpsichore. We also had eight conductors from Scotland who had kindly agreed to lead morning or afternoon group sessions. While most of these were old hands, it was encouraging to have three young conductors who ably led sessions at the Scottish Festival for the first time.

Because the day was so well attended we could offer groups at Advanced, Intermediate (x2) and Elementary levels, together with music in a variety of styles and periods. Morning choices ranged from Sören Sieg Pina ya Phala African Suite No. 2; Cristoforo Malvezzi  2 Sinfonie (1589); Marg Hall More for Four – especially composed for the Festival, and Brian Bonsor Suite for SAMA. The afternoon groups offered Philip Thorby Irish Suite; JS Bach Aria from Cantata 82; James Hook Tom Careless, or Country Dances arr. Andrew Challinger.

Edinburgh SRP branch commissioned a piece especially for the Festival from our Music Director, Michel Graham (one of the youngsters!) He conducted a massed playing of his A Parisian Sketchbook (2016) with great aplomb. It was fun, interesting and quite a challenge. A copy of the piece will be given to each Scottish branch, and extracts will be on the SRP website in due course.

Orkney was much in our thoughts: as people arrived and set up in the morning we played a CD collection of Sir Peter Maxwell Davies’ music A Celebration of Scotland which includes the choir of St Mary’s Music School, Edinburgh, and Sir Peter playing the evocative Farewell to Stromness on solo piano. Then during the midday recital by the Edinburgh First Sunday Recorder Group a quartet played one of the few pieces for recorder written by Sir Peter: Mrs Johnson’s Tunes.

The closing session came all too soon: Philip Thorby conducting movements from Staeps The Unicorn’s Grace.  A stirring sound and sight!

We were grateful to have the support of music publishers and recorder sellers and repairers throughout the day. They contribute greatly to raising the tone in Scotland where recorder playing remains in very good heart.

Tutoring at all levels and CONCERT.

On the following day, Sunday 15th June, the Flanders quartet also tutored workshops and performed a concert in Edinburgh for the Early Music Forum of Scotland.

In the 75th Anniversary season of the Society of Recorder Players, we were delighted to welcome the renowned Flanders Recorder Quartet who tutored and conducted all playing sessions and performed their programme “Banchetto Musicale”.

On the following day, Sunday 26th May, the Flanders quartet also tutored workshops and performed a concert  in Edinburgh for the Early Music Forum of Scotland.

There is a report of the event here

Massed playing sessions, workshops and a performance by the Scottish Recorder Orchestra (conducted by Eileen Silcocks).

A report by Franzeska G Ewart  with photos courtesy of Maben Stirling.

On Saturday 14 May Glasgow hosted the Scottish Recorder Festival. It was held in Ibrox Parish Church and, this year being the Glasgow branch’s 50th birthday, the occasion felt particularly special. There was a good turnout, with over sixty people attending from all over Scotland, as well as a welcome few all the way from Ireland and England.

(Click on the picture to see a full-size version on a new page.)

Participants then chose between Ed Friday, conducting his own arrangement of the Vivaldi Recorder Concerto in A minor, David Powell with Gavin Bryar’s A Family Likeness (an interesting and rather challenging contemporary piece), and Isobel Luke’s selection of ‘Intermediate’ pieces, including Paul Clark’s arrangement of Blow the Wind Southerly.

Lunch followed, with a chance to visit the Early Music Shop, Willobie Press, Recorder Music Mail and Hawthorns, as well as browsing through a selection of second hand music.

After lunch, the choice was between Marion Scott conducting J. G. Walther’s partita Jesu, meine freude, Pamela Flanagan with John Hawkes’ Septet, and Eileen Silcocks’s Just Fun by Allan Rosenheck. These sessions were followed by familiar faces Stuart Forrester and Marg Hall conducting Gaston Saux’s Quartet in F and Marg’s new Elsie Marley & other great tunes from Northumberland respectively. There was a newcomer too, Mandy Kettles, from the Hillfoot branch. Mandy teaches music at Alva Academy and is active in Hillfoot’s Music for Youth Orchestra. She presented her group with Gibbons’ Fantasy No 3 and Michael Meech’s Puppet Show. All the playing sessions were much enjoyed and, with such an eclectic mix of styles and periods, there was something for everyone as well as the temptations of the shops available all day!

After a welcome tea break, the Scottish Recorder Orchestra, under Eileen Silcocks, performed three pieces from this year’s repertoire: Banchetto Musicale Suite II by Schein, The 17th’s Farewell to Alva by Brian Bonsor, and finally Paul Richards’ lively Joshua! Not all the players were present, but the orchestra still managed to fill the hall with sound!

The festival participants now feeling suitably ‘chilled’, birthday festivities began in earnest with not one but two birthday cakes. To the accompaniment of Happy Birthday to US! Ethel Allan cut one cake, and everyone was pleased she was able to carry out this important duty. Ethel took over as MD of the Glasgow branch when Rosemary McGillivray died in 1997 and (aided recently by David Powell) worked energetically for the branch until poor health forced her to hand over the baton to Pamela Flanagan last year. 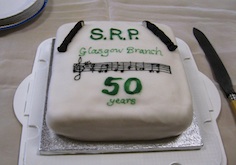 (Click on the picture to see a full-size version on a new page.)

The birthday cake crumbs had barely melted in the players’ mouths when Pamela conducted everyone in Four For Glasgow’s Fifty,which was, much to everyone’s delight, composed specially for the occasion by Steve Marshall. Steve’s piece is essentially a medley of traditional Scottish tunes, although an attentive listener may spot hints of each tune cropping up from time to time within the others. The tunes are Uist Tramping Song, I Have A Wife Of My Own, Bonnie James Campbell (sometimes called Bonnie George Campbell) and The High Road To Linton.

After all the merry-making, the day was drawn to a suitably light-hearted conclusion by Marion Scott leading everyone in her arrangement of Mozart’s La Bataille Contretanz K535. This was an arrangement with a difference however, featuring as it did a percussion part for chopsticks and music stands … Mozart may very well not have considered using such a combination, but we feel sure he would have approved!

As evening shadows lengthened over Ibrox the day wound to a close, sending everyone home tired but happy; and, judging by the many compliments received, all the organisers’ hard work was greatly appreciated.