The aim is to encourage young players of talent, and to help them in their professional aspirations. Competitors must show that they are able to sustain a full recital programme at a professional level.

The first prize consists of a recital at the London International Exhibition of Early Music in the year following the competition, together with cash prizes, donated by Moeck, the Society of Recorder Players and the Water Bergmann Fund.

International entries are welcome from recorder players of a suitable standard who are under thirty years of age on 1st November in the year of the competition. Previous winners are not eligible to enter.

The 2019 Competition received many impressive entries from across the world, more countries than any previous year. After listening to each entry anonymously, the judges narrowed it down to four finalists who will perform at All Saints Church, Blackheath at 1pm on Friday 8th November 2019. For further details of the Final please see the Early Music Shop website. Entry to the final is free with your Exhibition ticket. 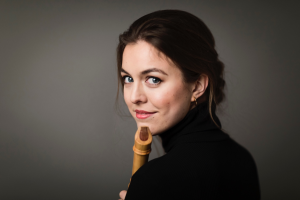 Described by The Times as a charismatic virtuoso Tabea Debus is constantly exploring the horizons of music for recorder and has performed widely in Europe, Colombia, Asia and the USA. Highlights include recitals at Wigmore Hall, the Schleswig Holstein, Edinburgh International, Brecon Baroque, London and York Early Music Festivals, and collaborations with La Serenissima, The English Concert, Dunedin Consort, LSO Soundhub, ECO, WDR Rundfunkchor, among many others. She has performed on the BBC Radio 3’s In Tune and Early Music Show, and in 2019 released her fourth CD Favourites, a follow-up to the highly acclaimed XXIV Fantasie per il Flauto. Born in Würzburg, Germany, Tabea studied at the Frankfurt University of Music and Performing Arts and the Royal Academy of Music graduating with the Principal’s Prize. Awards include 1st Prize in the 2014 Johann Heinrich Schmelzer and 2011 Hülsta Woodwinds International Competitions, and SJSS, Handel House and CMF Young Artists Schemes. She has been represented by YCAT since 2018. www.tabeadebus.com 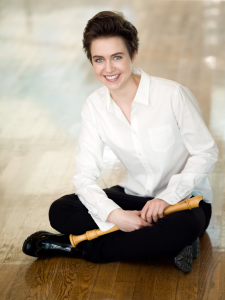 Paula Pinn was born in Münster, Westphalia, in 1998. After training as a junior student with Jeremias Schwarzer and Maurice Steger at the Nürnberg Music Academy, she is now a student of Dorothee Oberlinger at the Mozarteum University Salzburg. She has also gathered musical inspiration in master courses with Michael Form, Sabrina Frey, Erik Bosgraaf, Maurice Steger, Hille Perl, Jed Wentz, Lars Ulrik Mortensen and other Early-Music specialists.

Paula has won numerous awards, including first prizes at the Federal level of “Jugend musiziert”, at the Beethoven Bonnensis Competition in Bonn, at the Vienna International Music Competition, the First Liebenberg Audience Award and the GWK Encouragement Award in Music in 2016. The DKB Foundation offered her a scholarship in 2014, supporting her through numerous concert performances as well, e.g. at the Liebenberg Flute Festival in 2015. Special Awards were bestowed upon her by the Deutsche Stiftung Musikleben, the Federal Ministry for Families, Seniors, Women and Youth, the Association of German Music Schools and the publishing house Verlag Neue Musik. Most recently, her ensemble Marsyas Baroque was awarded a fellowship of the German Music Council and chosen to participate in the “Bundesauswahl Konzerte Junger Künstler” (Federal Selection of Young Concert Artists).

In 2017 she was invited as a guest artist to the renowned Early Music festival Trigonale, where she has been re-invited to present a solo project. Paula holds scholarships from the Werner Richard – Dr. Carl Dörken Foundation, the Deutsche Stiftung Musikleben and the German National Academic Foundation.* 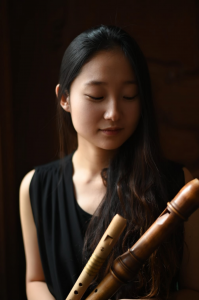 Hojin Kwon is a recorder player from Busan, South Korea. After completing her bachelor’s degree at the Korea National University of Arts, her passion for the instrument brought her to Europe. There, Hojin continued her studies at the Schola Cantorum Basiliensis with Conrad Steinmann, completing her master’s degree with the highest distinction.

Several influences have been instrumental in shaping Hojin’s music. Among them are the teachings of Conrad Steinmann and the workshops and masterclasses conducted by Jörg-Andreas Bötticher, Kees Boeke, Han Tol, and Pierre Hamon.

During her time in Switzerland, Hojin has formed several ensembles. Among those, her ensemble Sonorita has been awarded with multiple prizes, such as the 1st Prize of the “Concours de musique du Lyceum Club International de Suisse” in 2018 and the 2nd Prize and public’s award from the “XIX. Biagio-Marini-Wettbewerbs”. As a soloist, Hojin’s music has brought her to play throughout Europe with various orchestras and has been broadcasted by the national Swiss radio channel SRF 2 Kultur. 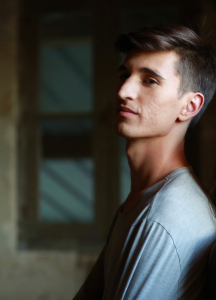 Martin Bernstein: I’ve been playing recorder since I was five years old – I was lucky enough that my first teacher, a jazz pianist from Brooklyn, knew to give me Handel sonatas once we’d finished with children’s songs. Since then, I’ve been looking for inspiration in many places. I studied with Nina Stern as a teenager in New York, and then with Reine-Marie Verhagen and Han Tol in Den Haag; I’ve now ended up pursuing a degree in philosophy and history. One of the things I love about the music that we play is that it shows me different ways of thinking and feeling, different aesthetic cultures. In 17th century music and song, I’ve found an intense dramatic power – for me, it’s music that speaks, and I’ve come to feel the ways that the recorder is suited for such storytelling. That’s led me to a way of playing and relating with other musicians: we share this drama with each other, looking for a pre-industrial intimacy in our conversations and in the small rooms in which we play. I like to think that that’s where most of the recorder’s repertoire can be found anyway – in the improvised songs and arrangements that these groups craft together. So that’s some of what I’m looking for, and what I hope to share in my program this November in Blackheath. I’ll be playing with Emmanuel Arakélian and Salomé Gasselin, two musicians who have some similar feelings. We’ll try to sing for you – and I’m very much looking forward to it.

This year’s finalists were Guillaume Beaulieu, Silvia Berchtold and Mirjam-Luise Münzel. You can read all about the performers here.

After three fantastic performances from our finalists, the results were as follows: 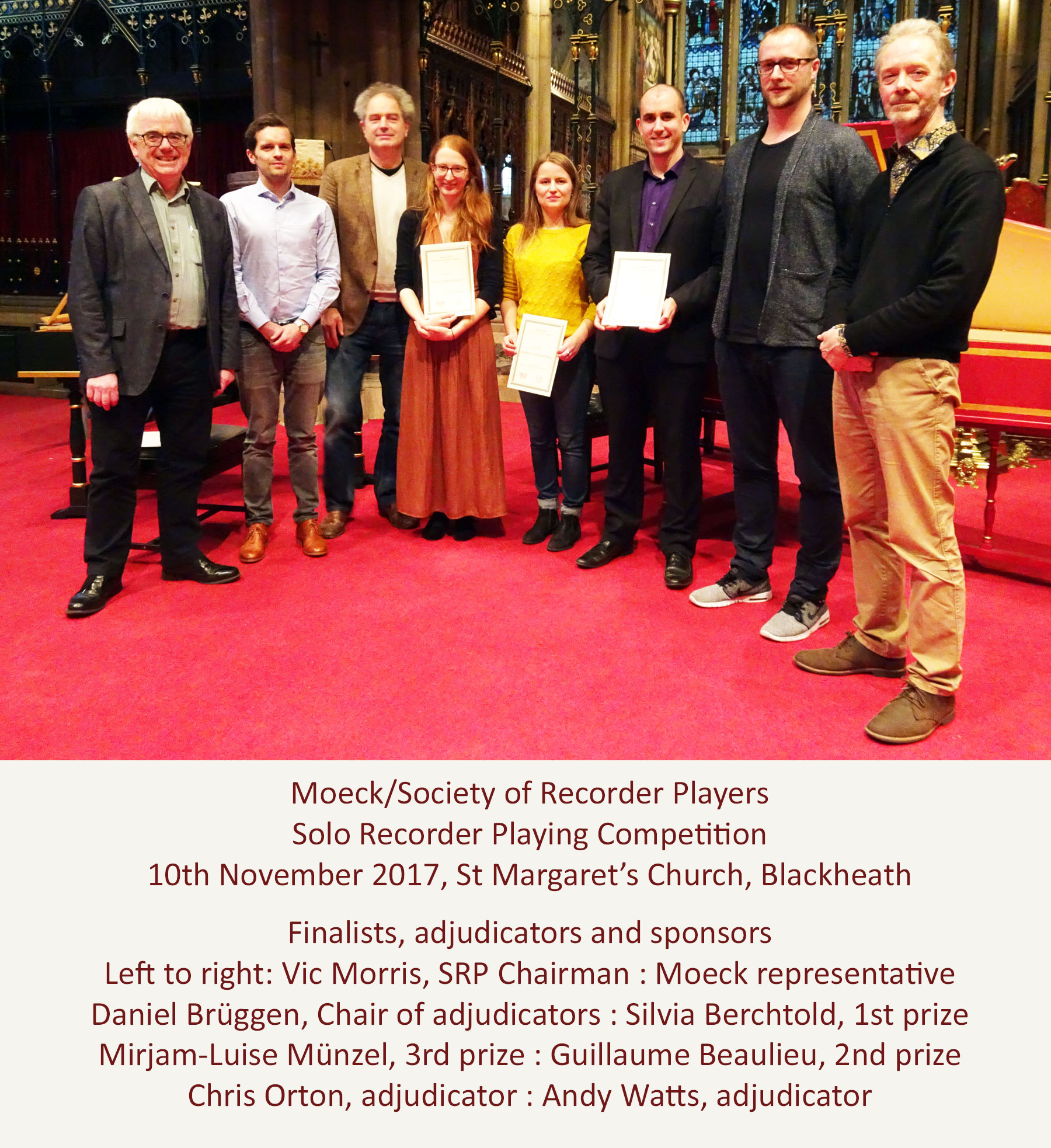 A review of the competition, written by Miriam Nerval, was published in the Recorder Magazine and the Early Music Shop Spring Newsletter in 2018. 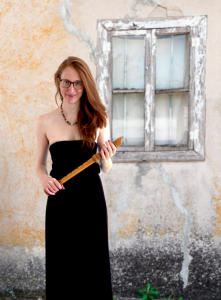 Silvia returned to Blackheath to perform her winner’s recital on Friday 9th November, 5pm at All Saints’ Church with Gerhard Abe-Graf on harpsichord. Her programme included music by Ucellini, Ravi Shankar, Arañés and improvisations after Hildegard von Bingen.

Silvia writes, ‘I have always struggled between a need to express something which was already within me, and the inescapable fact that a composition already has its own content for which, in order to get to know it better, you have to follow certain rules of style to learn and the “vocabulary” of its language. Sometimes these two components in my playing went into such different directions that one could easily consider the actual output as “unmusical”.

I am still struggling to find the middle way, between playing “correctly” (whatever that means) yet not devoid of any creativity and personality. Being awarded first prize in the competition was a meaningful confirmation to me to continue this way – even though judging always is a subjective decision and it could have been totally different under different circumstances.’ 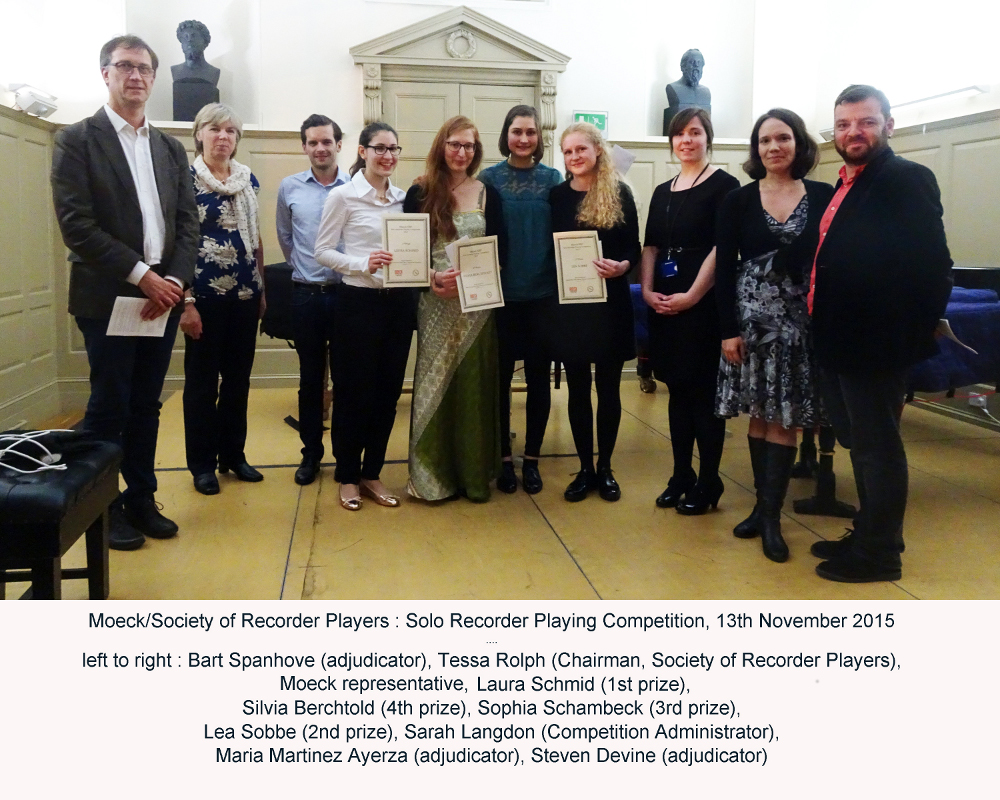 The finals took place on Friday 8th November at the Old Royal Naval College, Royal Greenwich as part of the 2013 Royal Greenwich International Early Music Festival and Exhibition. The winner was Anne-Suse Enβle from Germany, second was Laura Schmid and third was Claudius Kamp This photo shows the finalists with their certificates, the adjudicators – David Bellugi (2nd from right), Rachel Brown (3rd  from left) and Charles Matthews (at left) – and representatives of Moeck and the SRP. 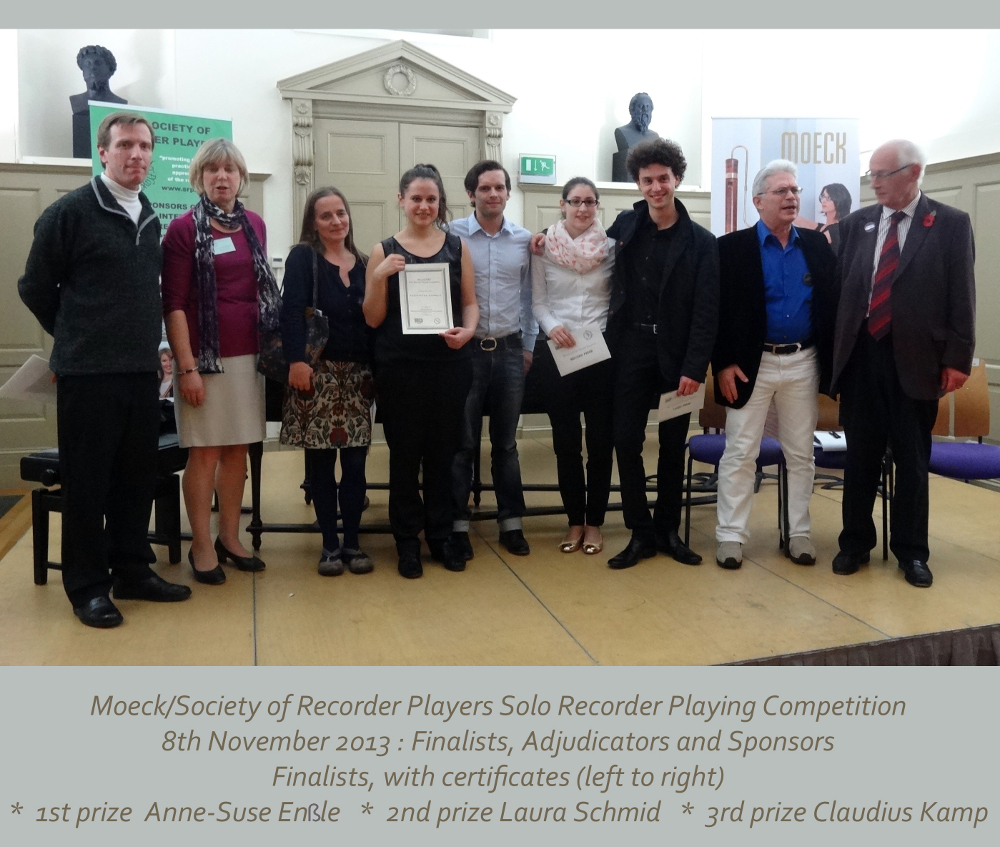