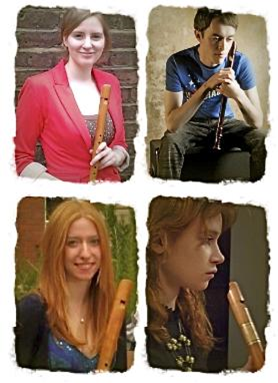 Consort Audite Nova was formed in summer 2011, when its members were students at the Royal College of Music in London. The quartet most recently won joint first prize at the 2012 Sir Anthony Lewis Memorial Competition and the RCM Century Fund Historical Performance Prize. They are also past winners of the Richard III Prize at the 2011 RCM Early Music Competition.

Other engagements have included a demonstration concert for Mollenhauer at the 2012 Royal Greenwich Festival of Early Music; concerts at the Norfolk Music Room in the Victoria & Albert Museum; performances with pop-band Metronomy at the Royal Albert Hall and Paris Olympia; and performances in various venues, including the London National Gallery collaborating with visual artists. The group’s current repertoire features music ranging from Mediaeval to the present day.

As part of the festival this year the Cornish branch would like to invite any young players and ensembles to come and join in an exciting workshop.  It is aimed at players of all  abilities.  In Cornwall our Musical Director will be working with local Junior and Senior Schools during the year and also with our Junior branch to explore some repertoire.  There will be coaching available on the Saturday morning with the award winning recorder quartet Consort Audite Nova.  Lunch will be provided and then there will be a short performance at 3.45pm in the Burrell Theatre, Truro School.

The following will be available during the weekend:

Some suggested alternatives to Truro School are:

There are also plenty of B+B’s in the area – The Town House
Book early as places fill up during the holiday periods.
Good website to start your search:
tourism.truro.gov.uk/