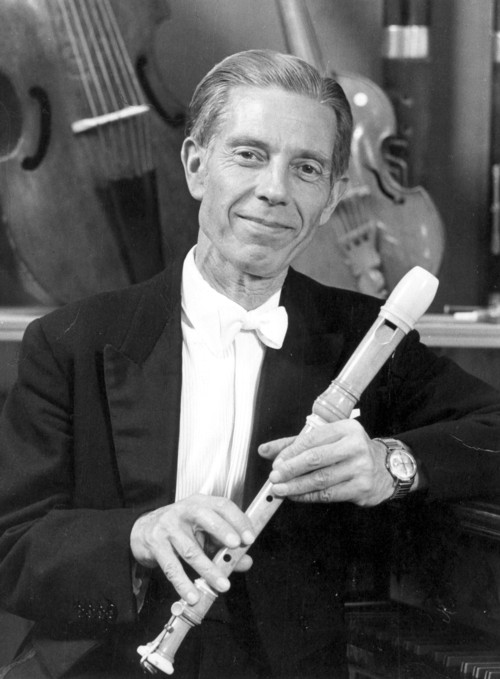 By permission of Dr. Brian Blood

(Edited from the obituary in The Recorder Magazine, December 1997 by Edgar Hunt)

Carl, the youngest of the four children of Arnold and Mabel Dolmetsch, devoted his life to music and the recorder. From his father, Carl learnt to play the violin and the treble viol and he grew up in an atmosphere where harpsichords and viols were normal, not “quaint”. Having lost a treasured Bressan recorder at Waterloo Station in 1919, it was his destiny to lead the revival of that instrument in the 20th century.

In 1919 he was already part of the family’s ensemble giving lecture-recitals of what we now call “Early Music”, leading to the first of the Haslemere Festivals in 1925 where the treble recorders were presented in the F major harpsichord concerto of Bach. On this occasion the recorders were played by Carl’s older brother Rudolph and Miles Tomalin. The following year the whole consort of descant, treble, tenor and bass recorders made their debut, led by Carl’s descant.

About 1930 Arnold Dolmetsch was dividing the three main sections of the workshops among his children and their husbands. Cecile and Leslie Ward were in charge of Harpsichords, Nathalie and George Carley were responsible for Viols and Violins while Carl was in sole command of Recorders.

Not only did he make descant, treble, tenor and bass tuned to A=415, the pitch adopted by Arnold Dolmetsch for all his concerts from the 1890s, but A=439 (New Philharmonic) which was becoming normal in the UK (military bands had been almost a semitone higher). All this was no mean achievement. Carl could not go to college in London to learn Recorder Making. There were no books on the subject. Nor was he free to travel to see the instruments in the museums of Europe. He would see a few antique instruments which came to Haslemere for repair. He was not in touch with other makers with whom he could compare notes.

In 1932 Carl began his partnership with Joseph Saxby (harpsichord and piano) which took them on concert tours to Australia, New Zealand, USA, Canada and Japan – a partnership which lasted some 50 years (Joseph Saxby died 23 June 1997).

In 1936 Edgar Hunt joined the staff of Schott & Co. to promote recorder music, much of which was being produced in Germany. He had formed a recorder trio with Max Champion (treble), his wife Stephanie (tenor) and himself (bass). They thought it would be a good idea to form a recorder society so that players who were scattered about the country could be in touch with each other. The Champions heard that Carl was planning something similar: so they all got together and started the SRP in 1937. Max was Chairman; Stephanie, Secretary, while Carl Dolmetsch and Edgar Hunt became joint Musical Directors. Arnold Dolmetsch was the Society’s President until his death in 1940.

In 1937 Carl married Mary Ferguson from Dumfries (Scotland). They had four children: Francois, who now lives in Columbia, twins Jeanne and Marguerite, and Richard, a brilliant young musician who died tragically.

Carl Dolmetsch was always forward-looking and seeking ways to improve the recorder and give it a contemporary role; hence the F# key, the echo key and the tone projector. On 1 February 1939 he gave his first full-length recital at London’s Wigmore Hall with Joseph Saxby at the harpsichord. In the absence of any 20th-century solos he composed his own Theme and Variations to show what the recorder could do. This was the first of his annual “Wigmores”, a series which continued for 45 years. The report of this concert in The Recorder News No 2 (1938-40) was written by “Terpander” (= Manuel Jacobs), an enthusiastic young recorder player who also wanted a “modern” repertoire for the recorder and had been encouraging his friends among composers to write Sonatinas for recorder and piano. These were not in time for Carl’s first Wigmore; but Carl and Edgar Hunt played four of them at a meeting of the London Contemporary Music Centre on 17 June 1939. The two which Carl played were by Stanley Bate and Lennox Berkeley, and he included the Berkeley in his second Wigmore which was on 18 November 1939. Most of these works were published by Schott.

During the War the Dolmetsch workshops turned over to making aircraft components, and there were no more recorders for the duration. But, after the War, excellent plastic recorders were produced to Carl’s design while the hand-made ones continued in the hands of Jeanne and Marguerite with the addition of son-in-law Dr. Brian Blood.

The end of the War saw the revival of the SRP and the addition of Walter Bergmann and Freda Dinn to the Society’s Musical Directors. The four MDs worked together to found the Recorder in Education Summer School, originally at Roehampton, but gradually moving further north. Meanwhile Carl Dolmetsch started the Dolmetsch Summer School nearer to Haslemere.

Carl was always faithful to his father’s teachings but he continued to seek a place for the recorder in the present and, as his Wigmore recitals continued, he commissioned new works from leading composers, including some with string quartet and other instruments. Among the composers who contributed to this repertoire were Herbert Murrill, Cyril Scott, York Bowen, Hans Gal, Arnold Cooke, Gordon Jacob, Edmund Rubbra and many more.

Carl Dolmetsch had already, in 1937, been given responsibility for the Haslemere Festival. He kept it going during the War years (in reduced form), and celebrated the Silver Jubilee in 1950 and the 40th anniversary in 1964. He also adopted British Standard Pitch for the Festivals and his own recitals to encourage cooperation with artists, particularly singers and string quartets from the outside world of music.