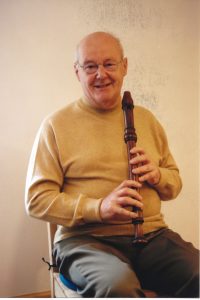 Anthony was born in London on 17th February 1926, the son of an Anglican clergyman but, following the break-up of his parents’ marriage, was brought up by his mother. He started school in Worthing where he was awarded a scholarship to the local grammar school. At the age of seventeen he was called up for military service and given an option of the army or helping the war effort in the coal mines. He selected mining, but this was brought to a premature end by a knee injury. He took the Oxford Scholarship Examination and was awarded an Open Exhibition to New College, but was unable to begin his studies until completing his military service in the RAF; it was not until 1948 that he finally went to Oxford.

Throughout his childhood, Anthony showed a growing interest in music and his first music lessons were on the violin. His teacher also directed a fife band, Anthony’s initial experience of wind instruments, and perhaps the reason for his purchase of a penny whistle. At the age of thirteen he was given a recorder by his elder brother, but at the time was rather dismissive of its musical qualities. At Oxford, however, he considered it was time to learn a “real” musical instrument, by which time the recorder was gaining an enthusiastic and informed following. Remembering the recorder given to him by his brother, Anthony purchased a Dolmetsch treble and taught himself to play it from Walter Bergmann’s Handel transcriptions.  Together with a harpsichordist friend he explored the baroque recorder repertoire and joined the Oxford branch of the Society of Recorder Players, which he was soon invited to conduct. It was also at this time that his interest in research and writing began to develop, and during his university vacations he wrote two guidebooks on Arundel Castle – one about the medieval buildings at its heart, and the other about the pictures in the Duke of Norfolk’s collection. Unfortunately, neither was published – the castle authorities considered them too academic for general use.

Anthony graduated from Oxford with a degree in English Literature and Language, his preference of English and Music not being permitted. Finding employment in the post-war period was something of a challenge, and his first job, in the post room at the University of London Senate House Central Office, was somewhat menial. Nevertheless, the year that he spent there was of much value, as it gave him an insight into university administration and proved to be an important stepping-stone to a career in this field in which he became involved for the remainder of his working life.

Whilst working in London Anthony joined Walter Bergmann’s advanced recorder class at Morley College. He also joined the London branch of the Society of Recorder Players and began to write articles on recorder technique for the SRP Newsletter. These became the basis of the First Edition, published in 1959, of Recorder Technique, written at the request of the Oxford University Press.

Further moves to King’s College Newcastle upon Tyne (where he met Christina, whom he married in 1957) and the University of Leeds, at each as an assistant registrar, eventually led to his appointment in 1963 as Registrar of the new University of Essex in Colchester – the youngest ever university Registrar in the country. In 1969 he took a consultancy with the Inter-University Council for Higher Education Overseas, which involved postings to Bangkok, Fiji, Mauritius and extensively in Africa. His final posting abroad was in Hong Kong.

Throughout this period the recorder continued to be an important element of Anthony’s musical life. Whilst in Newcastle he joined the local branch of the SRP and organised the very first SRP concert to take place outside London. In Leeds he co-founded the West Riding branch of the Society of Recorder Players and joined the editorial board of The Recorder Magazine. His A Practice Book for the Treble Recorder was published by OUP in 1962. Even abroad, there were opportunities for making music: he gave a recorder recital with a local pianist on Mauritius Television and arranged medieval music for a performance of “The Lion in Winter” in Hong Kong Civic Hall.

 Anthony returned to England, and in 1972 was appointed Vice-Principal of the Cambridgeshire College of Arts and Technology (now Anglia Ruskin University) where he played a pivotal role in academic development. He became much involved in the musical and social life of the city, particularly with the Cambridge branch of the Society of Recorder Players, of which he was President (later Honorary President), and also teaching recorder at both Universities. His writing continued, and Introduction to the Recorder, A Tutor for Adult Beginners, was published by OUP in 1978.

Owing to a rare neurological condition Anthony took early retirement in 1984, which enabled him to concentrate on the music, history and symbolism of the recorder. Playing Recorder Sonatas, was published by OUP in 1992. His lectures, and extensive research, especially that involving recorder iconography, is perhaps his most significant work on which he contributed many important articles to a number of journals, including The Recorder Magazine, American Recorder and Early Music. In 1996 he was made an Honorary Fellow in Music at Anglia Ruskin University, and in 2007 he was awarded the American Recorder Society’s Presidential Award of Honor.

I shall always be personally grateful to Anthony for his support at the time I became editor of The Recorder Magazine in 1993. He was among a handful of contributors without whose encouragement a fledgling editor would not have had the confidence to undertake and continue such a task.

A Vice-President of the Society of Recorder Players, Anthony’s contribution to the recorder was extensive and of considerable importance. Yet he remained a very modest man, always showing interest in and providing practical assistance with the activities of other recorder players and enthusiasts who shared his passion for the instrument.

I am indebted to John Turner for permission to use material from a biographical article he wrote in celebration of Anthony’s eightieth birthday in 2006. I am also grateful to Christina Rowland-Jones for reading through my draft and kindly providing the photo of Anthony.