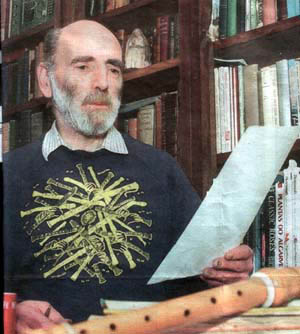 Douglas Haston, Musical Director of the SRP Aberdeen Branch, died on 4 November 2003 at the age of 72. He came from a musical family of teachers and after going to Aberdeen University to study Latin and Greek he switched to music. He taught in primary schools and later became a peripatetic teacher of recorder in the schools in the North-East of Scotland and in so doing encouraged many thousands of young players. During his time recorder playing flourished in the region. His delight when former pupils turned up at Branch meetings was indicative of his happiness in his work. He was always supportive of his pupils at festivals, and followed keenly the careers of those who went on to Music Colleges and later to teaching and playing positions both at home and abroad. To his great sadness after his retirement in 1996 he was not replaced as a specialist recorder teacher.

With Douglas at the helm, Branch meetings were always relaxed and happy occasions. He led the Aberdeen Branch, with scarcely an absence, for over thirty years, providing a wide range music. His own music arrangements were beautifully and immaculately written, but more recently were computer generated with considerable skill. Douglas also conducted at S.R.P. Festivals, including all those in Scotland, served on the S.R.P. Committee and joined the newly-formed Scottish Recorder Orchestra in 2002. He inaugurated the common database of branch music on the S.R.P. website.

Douglas’s family were very supportive of his recorder work. Many members of Aberdeen and other branches attended happy playing days with a warm welcome at Balbithan House, a 16th century tower house, which was the home of his mother-in-law, Mary McMurtrie, a noted artist who died at the age of 101 a few days before Douglas .

For Douglas, music was not just a hobby, but a way of life. He played the double bass in the Cults Scottish Quintet and the Strathspey and Reel Society, for whom he arranged music, and was for many years President of the Aberdeen and North East Music Festival. He worked tirelessly for all these organizations.

He will long be remembered as an enthusiastic teacher, a tireless worker, an inspiring leader and most of all as a valued friend. We extend to his wife, Elspeth, his seven children and fourteen grand-children our sincere sympathy for them in their loss.