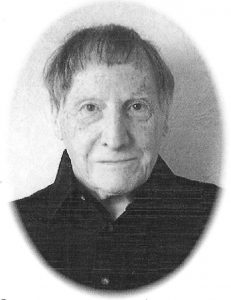 Ian’s funeral and memorial service on 12th February were perhaps as unconventional as the man himself, for he had chosen the music and had a hand in planning the services. During the former, at Bedford Crematorium, no-one was surprised by the choice of Sibelius’ Finlandia, one of his favourite works; but who would have guessed that he would make his exit to a Shakin’ Stevens rendition of “This Old House”? The memorial service, at a packed Upper Caldecote Methodist Chapel, didn’t provide any musical surprises; a selection of his favourite hymns, with a recorded movement from his First Symphony and then Peregrine Recorder Orchestra playing the third movement from his Second Symphony “live”, that being the work of which Ian was most proud. However, the usual eulogy was replaced by extracts from Ian’s own memoirs, which provided both humorous and poignant moments and gave those who had not known him for very long an insight into the life of this rather private man. Few realised that it was his oppressive Presbyterian upbringing which produced the huge inferiority complex which haunted him for the rest of his life, and views which sometimes left him severely at odds with others; and perhaps even fewer knew that in his younger days he had been quite an athlete.

Ian found relaxation – and, coincidentally, his future wife – in musical circles, first of all in North London and then on the Buckinghamshire / Oxfordshire border where his work had taken him. Those who know him only as a name at the top of their sheet-music may be unaware that Ian was an extremely talented artist and, after some false career starts, he was able to use his skills as a civilian designer / illustrator attached to RAF Medmenham. He joined Aylesbury Symphony Orchestra, becoming principal clarinettist, and also formed a recorder group – the Oakridge Consort – by twisting the arms of friends and colleagues. In the late 1970s this combination gave him an idea; would it be possible for a large structured group of recorder players to perform orchestral music? The idea developed, and a small ad-hoc recorder orchestra was formed under Ian’s direction. Little did he know that a couple of hundred miles north, in Manchester, Dennis Bamforth had almost simultaneously had exactly the same idea. The two pioneers worked on, completely unaware of each other or that there had been a similar movement in Germany in the 1950s. Eventually Ian and Dennis did meet, swapped ideas, wrote music for each other’s groups, and the rest is history; the recorder orchestra gradually “took off” in the UK, and spread like wildfire.

By this time the closure of RAF Medmenham had meant a move for Ian, to RAF Henlow in Bedfordshire where he was to remain until he retired. An early project was to start a recorder orchestra in the area, which Ian set about by inviting every proficient recorder player he could find to a rehearsal in the hamlet where he now lived, Ickwell, in 1985. Many of these were drawn from the Beds & North Herts Branch of the Society of Recorder Players, which Ian joined and of which he became Musical Director for a few years. Enough players liked Ian’s idea, and the UK’s third permanent recorder orchestra was born – but what to call it? This hadn’t been a problem for the first two; Manchester Recorder Orchestra and London Recorder Orchestra are selfexplanatory. But who would have heard of Ickwell, pretty though it is with the manor house and Thomas Tompion’s thatched cottage at either side of the green with its maypole? Even the nearest town, Biggleswade, isn’t exactly well-known, and “Bedfordshire” didn’t seem right as many of the players came from neighbouring Hertfordshire and Cambridgeshire.

It was perhaps in desperation that Ian decided to dispense with a geographical name altogether. He remembered a business which he had cycled past every day on his way to work in his pre-RAF era in London, the name of which he had always liked for some reason and filed away for future reference; so Peregrine Recorder Orchestra it was – surely still the only one named after a garage?

With Peregrine on hand to try things out Ian’s music-writing became pretty much an obsession, resulting in a legacy of six symphonies, over a dozen orchestral suites, and a huge raft of other compositions and arrangements. Many of his more recent compositions were inspired by holidays with his wife Barbara, or by major events such as the Olympic Games – even the advent of the Large Hadron Collider provided an excuse to write another piece! Much of his work is now published, available from Recorder Music Mail, and played by recorder orchestras around the world. Peregrine Recorder Orchestra is still very much active; Ian had to relinquish the baton some years ago due to poor health, but Barbara still plays contrabass and we still have three players of 1985 vintage! We are planning to hold a memorial concert before too long, and hope that Ian’s pioneering work will not be forgotten outside our area of rural Bedfordshire.